Andy is a 16-year-old high school sophomore that lives in Moorpark, California. He loves going to the gym, weight lifting, playing video games, and was very excited to make the varsity track & field team last year. He began to have pain in his leg for some time and continued to intensify until he was unable to continue training. Andy was later diagnosed with Osteosarcoma on December 26, 2018, just after turning 16. 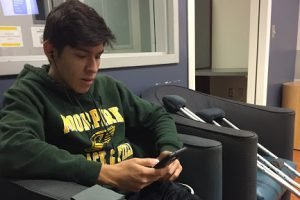 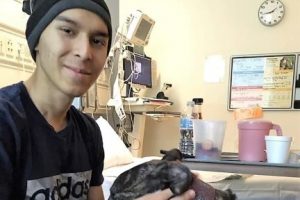 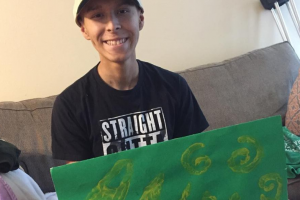 Currently, he is under the care of a pediatric oncology team at a hospital in Los Angeles where he has been receiving chemo treatment. Those hospital days are really tough, not just because of the chemo effects, but because as an active teen, he is away from his friends and social life at school.

On March 22, as Andy was waiting his for his Methotrexate levels (a form of chemotherapy) to go down, he happened to be watching the #TeamWyatt live stream on Instagram from Teen Cancer America during their fundraising walk. It was a beautiful sunny day in Los Angeles, and he really wished he could be there. Wyatt was told about this message and sent words of encouragement to Andy!

After receiving a message from Andy’s mother about him watching, the social media team and Wyatt Oleff wanted to send Andy a personalized message of hope and strength. Not only did he receive a message from Wyatt, but also from the team who participated for TCA’s fundraising walk. Watch below:

Andy is scheduled to have limb-saving surgery on Wednesday, April 10th. After that, he will continue with more rounds of chemo until mid-August. He cannot wait to return to high school to reunite and see his friends again. Andy will not be able to run anymore, however, he is planning on keeping strong and return to the gym.